"Dedicated to the preservation of the funkiest instrument known to man."

Reproduced from Article in Australian Musician Magazine1997 by Brad Coates

Arguably the most successful keyboard ever produced by German Company, Hohner, was the Clavinet. Hohner, known mainly for their reed instruments (harmonicas, melodicas etc.) had previously made several major contributions to the classic keyboard "Hall of Fame."

Musician and inventor, Ernst Zacharias, designed the first of these, the Cembalet, in the 1950’s. This was intended to be a portable, amplifiable version of the Cembalo, or Harpsichord. This worked by plucking the end of a flat reed with the key, which was then picked up and amplified in much the same way as an electric guitar. A little later came the Pianet. Both the "CH" and "N" models once again used flat reeds, but employed a very different plucking/striking action. When a key was depressed it engaged a "sticky pad" with foam backing which actually stuck to the reed. When the key was released, the pad came unstuck causing the reed to vibrate which was then amplified. The Pianet model "T" came much later and utilized the suction of a soft rubber pad onto the reed. This was somewhat superior to the "N" and "CH" models, but still had several drawbacks. Although made very popular by bands such as the Zombies and Small Faces, there wasn’t much dynamism available from the keyboard. As all the reeds were damped upon release, this negated the possibility of obtaining sustain via a foot pedal. 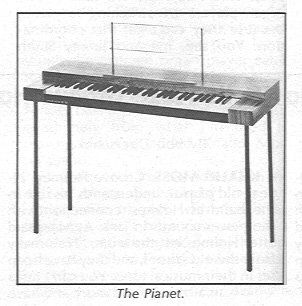 In between the Pianet "N" and "T" models, Zachariah invented what was to become probably Hohner’s most successful, and certainly funkiest keyboard - The Clavinet. Essentially designed to replicate the sound of a Clavichord without the Clavichord’s inherent wimpiness, the Clavinet was an amazing success. The early models - Clavinet I with inbuilt amp, Clavinet II with tonal filters, Clavinet "L" with it’s bizarre triangular shape, all led to the Clavinet model "C". This, in turn, was refined into the D6 - a portable, amplifiable keyboard. This had a fully dynamic keyboard (see fig.2) - as the striker is directly underneath the key, the harder you hit, the louder and more vibrant the tone. (Of course, if you hit too hard you’ll split the striker pads converting the Clav into a Cembalo!!)

Mention the Clavinet today and most people will automatically think of Stevie Wonders "Superstition" - a recording that owes as much to the instrument played upon it, as it does to the artist that wrote and performed it. The D6 was later superseded by the model E6 and the Clavinet/Pianet Duo. These were basically the same, but more roadworthy and better protected against proximity hums and generally quieter than previous models. However, these models came just a bit too late on the scene in the age of electronics to be as successful as they deserved to be.

With all of these instruments enjoying a resurgence in popularity a few words of advice about purchasing would not go astray. Realistically, the Black models are the best to purchase in both the Pianet and the Clavinet. The Pianet "T" has a superior striker system and is a lot more roadworthy. The Clavinet E6 is quieter in background noise and once again more robust. Although noisy, the Cembalet is fine as it is, as there are not a lot of moving parts to wear out. A word of warning on the Clavinet however, as there are NO spare parts available on an International basis. Do not pay much for a Clav unless it has been rebuilt. Although guitar strings can be used, their amplitude and tonal qualities are not the same. You also have to join strings together to get the correct length for the lower strings. Striker pads are no longer available and any that are still floating around are generally unusable because of oxidization and perishment problems. Hohner will not be making any themselves because of small production volumes elevating the price out of viability.

At present no other way exists to repair Clavs that I am aware of, other than dipping the entire keyboard assembly in a plasticized rubber compound, allowing this to cure and then painstakingly shaping each single striker by hand. Although this is effective, it is an extremely time consuming business and very costly for a professional to undertake. When buying a Clav privately, check the interior for oxidization and in particular, check the strikers. When a key is pressed down firmly and held for a second there should be no discernible plucking or "sticking" of the pad to the string. A Clav that’s been played by a meatfist will probably have split strikers, i.e.: the pad splits in the center and slips down each side of the string like a claw making the Clav essentially unplayable 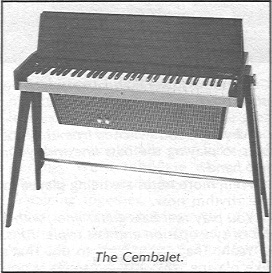 Like all electromechanical keyboards there is nothing that sounds and plays like a Clav - it actually makes one feel like playing it and it is an absolute pleasure to use live. If you do find a good one somewhere, don’t hesitate to purchase it - this is a usable, fantastic sounding, funky little keyboard. You won’t regret it. Suggested listening :

"Young Girls Are My Weakness - Commodores